With several reptiles, figuring out the sex can be a bit challenging, especially if they are young. I’m going to talk specifically about sexing Carolina Green Anoles today. This has been on my mind, because I’ve finally managed to figure out what gender Sammy is! Sammy is actually a male and I’m really happy I don’t have to start calling him something else. There are a few different ways to figure this out when it comes to Green Anoles, so let’s hop right in.

Green Anoles are a sexually dimorphic species, as are most reptiles. There are a number of physical clues available that help us determine the sex. Unfortunately, as you will see, some of these clues depend on the age of the anole. At least one clue, while mainly applying to males, can show up in females from time to time. First off is the most obvious physical trait, the length.

Typically, an adult male anole can reach lengths of 8 inches. Females on the other hand rarely pass the 5 to 6 inch mark.  While this can be a helpful clue, it’s not going to help much if your anole is still growing. There is also the fact that there can be smaller males and larger females sometimes. The length is a good start, but you will most likely need more information.

Almost everyone has seen a Green Anole puff out its reddish dewlap. It’s one of the most noticeable physical traits for this species. Males have the iconic red dewlap that almost everyone pictures. Females also have a dewlap, but it will normally be smaller and lighter in color. 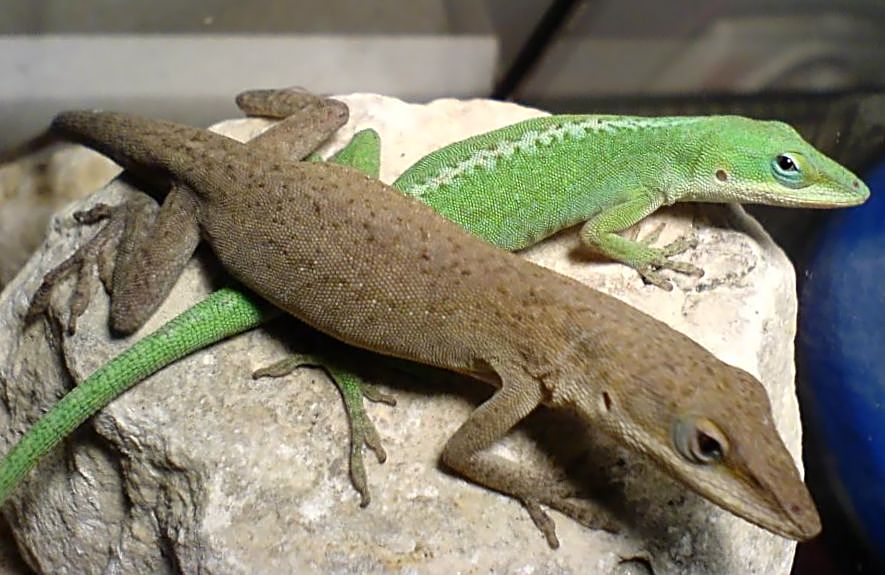 If your anole loves a thumping bass sound in their music… oh wait, wrong white stripes. Getting back on track, often adult female anoles will have a white stripe that runs down the middle of their back. However, not every female has this stripe. Also, young anoles of either gender can have this stripe as well that can eventually fade. This is not the best clue to use. 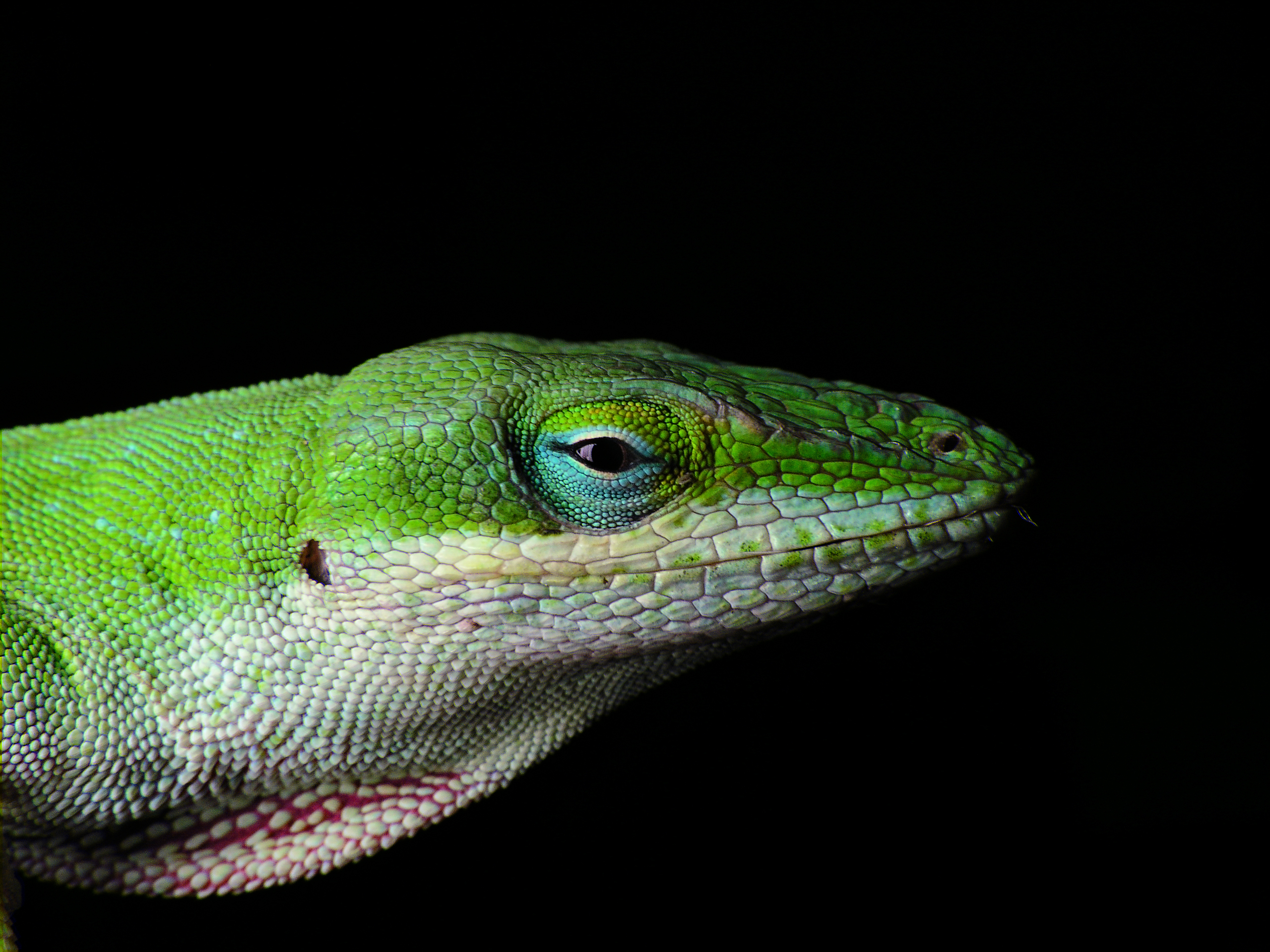 You want to look at my what?

If you have an anole who is somewhat okay with being handled, you might have an easier time looking at this clue. At the base of the tail, male anoles develop two larger scales, also known as the Postanal Scales. On young lizards, it can be very hard to spot this, so you may have to wait until they are older. Out of all the physical traits, this one is something you will never see on a female anole. If you are able to pick up your anole, you can flip them over and look underneath their tail. If you can’t, just wait until they are crawling on the side of their tank to look.

All of these clues are about how your Green Anoles interact with one another. If you only have one anole, there isn’t much of a reason to continue. The only time I can think of a behavioral clue maybe helping is if you see your anole posturing. For example, there are times when Sammy will spot his reflection and try to fight it. Of course, it is possible for a female to do this as well. Let’s start off with the aggressive behavior.

If you happen to have two male green anoles in the same tank, they will very often fight each other. This one can be easy to spot. I’d definitely notice if two of my lizards were fighting. Typically when males fight, you will see them display their dewlaps, open their mouths, and bob their heads at each other. At some point they will lunge. At this point, you should definitely separate them. Females can fight, but they usually won’t. 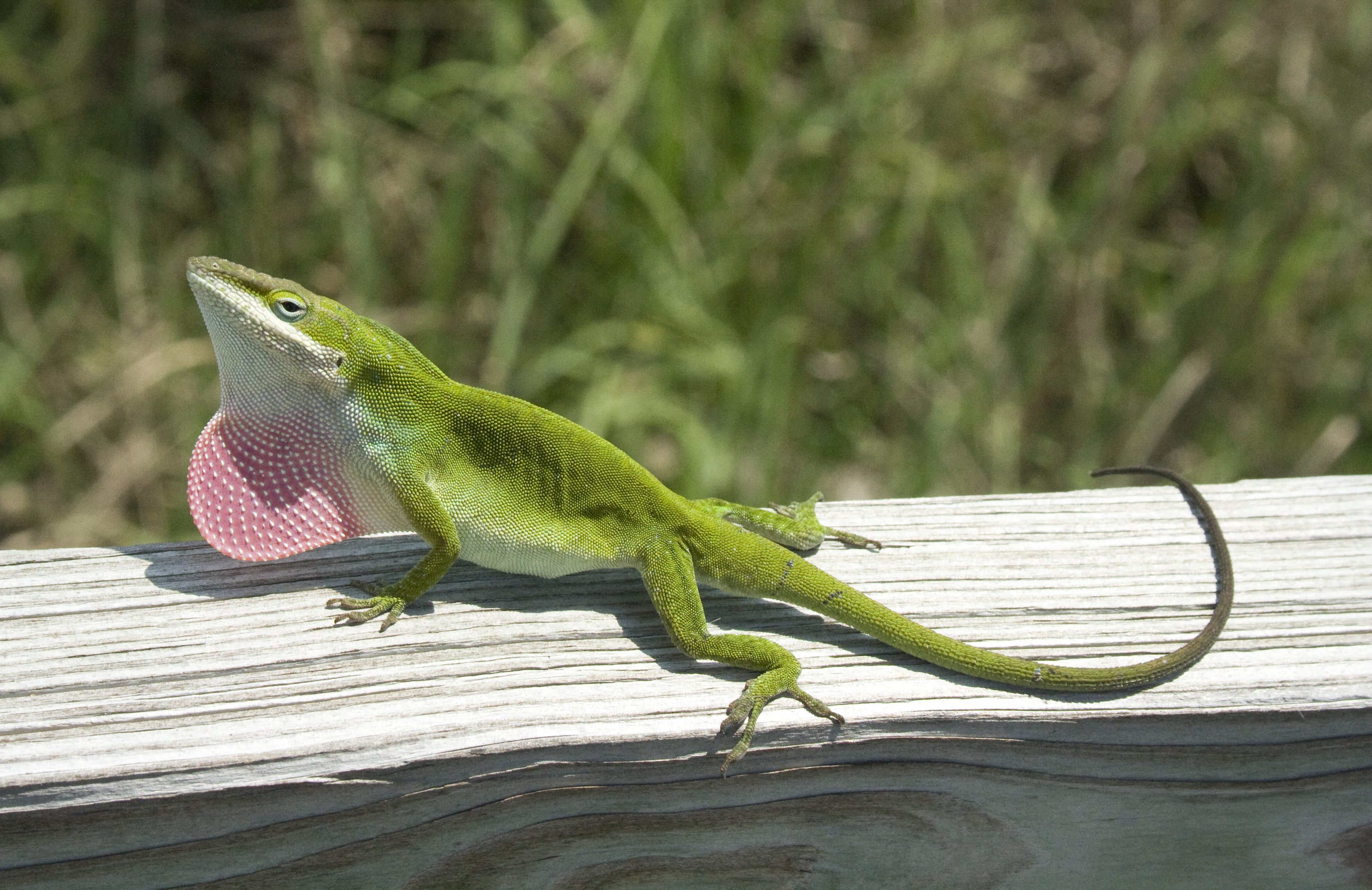 Yeah, you want some of this?

If you have multiple anoles, you may see this sort of behavior pop up between the months of April and September. It’s easy to mix up aggressive behavior and courting behavior. They both start with the male bobbing their head and flaring their dewlap. The male even eventually charges at the female. The difference is that during courting the male tries to grab the scruff of the female.

Let’s Get It On

I know that it goes without saying, but if you catch them in the act then the gender is pretty clear. The Anole on top will be the male, the one on the bottom will be female. This is one of the best clues, because you instantly know the gender of not just one, but two of your Anoles!

That’s basically all you need to know to sex your Green Anole. It might take a bit of time, but eventually the sex will become clear. It took me around three months to finally figure out Sammy is a boy. Have any questions about finding the gender? Just have a question about Green Anoles in general? You don’t care about Green Anoles and just want to ask a random reptile question? Leave a comment below! I’m happy to answer any questions I can.